The Twisted Circus slot machine – a game released by the company Microgaming which has a well-deserved reputation among software providers for online casinos. 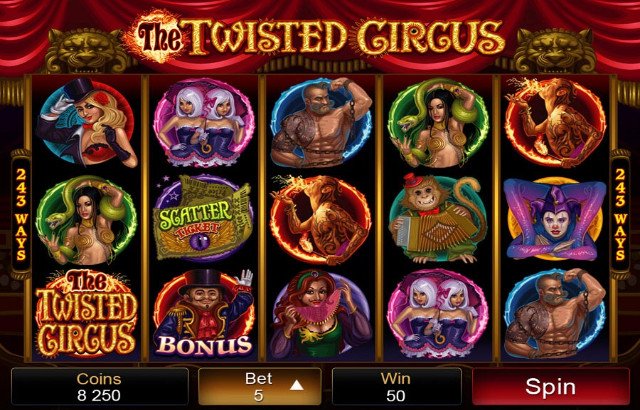 The Twisted Circus SlotFrom the name of the slot it is clear what it is about. However, you have to visit not a normal circus but the one with some perverse and frightening. The famous circus music but with a frightening slow tone, you will be surrounded by the stars of the circus arena – a bearded lady, a monkey playing the harmonica, half-naked babe with tamed snake, a fire thrower, an acrobat, a mighty man in chains, Siamese twins and a dwarf – sometimes there will be a feeling that you are watching a horror movie or a hit in a real circus of the nineteenth century, which collected all the monsters of the time, and some may have been specially designed, as was the custom in those days. And you are a part of a cynical public willing to pay good money to look at the ugliness of nature causing disgust.

Graphics and drawing of The Twisted Circus slots are at the highest level. The slot machine consists of five reels and 243 winning combinations. Pay lines do not exist here – it is a new direction of slot machines which starts to gain great success.

In addition to the above characters The Twisted Circus slot machine has Wild symbol (the game logo) which replaces the other symbols and Scatter symbol (the ticket to the show) which increases your winnings and triggers free spins – as many as 13.

The symbol of the dwarf when appeares on the 3, 4 and 5 reels of the game, starts a bonus game where you need to open the inverted images with symbols to get at least 3 identical pairs.

There is a risk-game here, as well as auto-spin function.

The Twisted Circus slot machine can be played as a free demo version and for real money.