The experience of many online casino players around the world began with the opportunity to play Microgaming slot machines for free and without registration in demo mode. It is one of the first game providers to initially focus on remote gaming software. The company has been operating for over 25 years, and its name has become a kind of quality mark in the iGaming industry. The provider was noted for the largest network of progressive jackpots, membership in the board of founders of eCOGRA and even a mention in the Guinness Book of Records. Below you will find hstory of the company, its games review and the list of the best Microgaming casinos.

50 FS on Bork the Berzerker

The developer has been operating since 1994 and is headquartered on the Isle of Man in the UK. Since 2018, the company has been headed by John Coleman. From the very beginning, the team focused on developing software for playing over the Internet.

During the growing popularity of mobile casinos, the manufacturer quickly responded to market trends and was one of the first to offer slots adapted for smartphones and tablets. 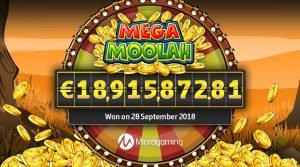 Microgaming slots are a vivid example of the fact that a big win in an online casino is quite real. In the spring of 2009, the Mega Moolah slot machine paid out over 6 million US dollars to the user, securing the manufacturer a mention in the Guinness Book of Records. Six years later, player John Heywood received more than 17 million euros on the same slot machine, which allowed the company to break its own record.

The developer cooperates with leading companies working in the gambling industry.

Users can play Microgaming slots for real money in licensed online Microgaming casinos with a positive reputation. The brand is invariably associated among players with bright and high-quality video slots that meet the most stringent international standards.

In 2003 the company became one of the founders of eCOGRA – a reputable organization specializing in testing and certification of software for online gambling. The provider is a member of the Manx e-Gaming Association (MeGA), which aims to maintain the Isle of Man’s position as an international leader in electronic gaming. The manufacturer officially cooperates with operators in more than 20 licensed jurisdictions. The license to operate has been issued by the Malta and UK gambling regulators.

The provider supplies video slots, card and table entertainment, roulettes to the most visited Microgaming online casinos. New developments of the manufacturer do not go unnoticed and often occupy top positions in user ratings. In the line of the brand, there are names that are released for the game with live dealers. The company supplies solutions for bookmakers and poker rooms.

Each device is available in the game for money mode and in the demo version. The second option is suitable for those users who prefer to comprehensively evaluate the video slot before making real bets on it with accompanying financial risks. The introductory mode includes all the gameplay features laid down by the manufacturer in the full version. The exception is progressive jackpots, which are not raffled in the demo. The official website hosts new Microgaming slots and slot machines, released earlier and already well known to experienced users. All of them are available for free without registration.

Advantages and features of Microgaming slots

The provider often acquires licenses to develop slot machines dedicated to iconic TV shows, movies and other pop culture elements. Users cannot download slot machines to play offline, but the availability of a mobile version and fast launch even with a slow Internet connection neutralize this feature.

Game of Thrones. The video slot was created based on the mega-popular TV series and remains in demand for over five years. After each win, the user can launch a risk game with heads and tails, but this is not the most interesting feature of the gameplay. The slot has four free spins modes, each of which corresponds to one of the clans: Starks, Baratheons, Lannisters, Targaryens. The player himself chooses the type of free spins, their number and the value of the additional multiplier will depend on this.

Immortal Romance. The vampire game attracted users with a well-developed plot and colorful characters. Folded wilds may appear on the playing field in any spin. The Chamber of Spins bonus consists of free spins with a story advance, during which each of the characters can reward the player by activating additional features.

Reel Gems. The machine invites you to visit a real treasury. This is one of the first developments of the manufacturer with the option of paid respins of individual drums. Each player can get 15 free spins with a triple payout multiplier.

Big Kahuna Snakes & Ladders. The sequel to the popular game takes the user to Hawaii. At any time, 15 free spins with double winnings can start, and the most interesting feature is the thematic bonus implemented in the format of a tabletop quest.

Break da Bank Again. One of the reprints of the well-known machine allows you to look into a bank vault and leave it not empty-handed. The video slot has high volatility and gives you a chance to win up to 25 free spins with an additional multiplier.

Avalon II. The second part of the device dedicated to the legends of King Arthur was released in 2014, 8 years after the original release. The gameplay includes 8 consecutive bonus rounds at once with the advancement of the story.

Battlestar Galactica. The video slot was developed based on the TV show of the same name and is popular with science fiction fans. Portraits of the heroes of the series and thematic symbols appear on the reels. There are three modes in the main game, which alternate randomly. Prize options are also represented by free spins with a progress system and two bonuses.

Soccer Safari. The machine could have become a typical development dedicated to football, if not for the four-legged characters and the original bonus game. During it, the user will have to choose which of the animals will shoot a penalty kick at the opponents’ goal.

Hitman. Created on the basis of the video game series of the same name, the slot attracted users with an exciting storyline. Gameplay includes item selection bonus and free spins.

Playboy. The legendary men’s magazine inspired the developers to create a thematic apparatus. The success of the title was guaranteed thanks to symbols with portraits of models, 243 winning directions and free spins with a progress system and additional bonuses.

The IGT headquarters is located in Lac-Begac, Nevada, USA. In addition, the company has a…

The well-known Amatic corporation is a major developer of popular slots, which occupy an important…

Visitors to online casinos, as a rule, prefer slot machines, roulettes and other games from…

The modern world provides the user with unique and almost unlimited possibilities in choosing entertainment.…

This website uses cookies to improve your experience while you navigate through the website. Out of these, the cookies that are categorized as necessary are stored on your browser as they are essential for the working of basic functionalities of the website. We also use third-party cookies that help us analyze and understand how you use this website. These cookies will be stored in your browser only with your consent. You also have the option to opt-out of these cookies. But opting out of some of these cookies may affect your browsing experience.
Necessary Always Enabled
Necessary cookies are absolutely essential for the website to function properly. This category only includes cookies that ensures basic functionalities and security features of the website. These cookies do not store any personal information.
Non-necessary
Any cookies that may not be particularly necessary for the website to function and is used specifically to collect user personal data via analytics, ads, other embedded contents are termed as non-necessary cookies. It is mandatory to procure user consent prior to running these cookies on your website.
SAVE & ACCEPT
error: Content is protected !!