The slot game is called “Mamma Mia!” where you will go to a real Italian restaurant, but rather to the kitchen of this restaurant. Here a good-natured chef creates culinary masterpieces in front of our eyes. Throughout the game he will have something to cook, cut, taste and periodically evaluate himself with phrases such as “Fantastico!”, “Bellissimo” etc.

Before the game starts we can see a short video introducing a story: a famous restaurant critic comes to the place to rate it, unexpectedly. Our poor chef will have to impress him in a very short time. 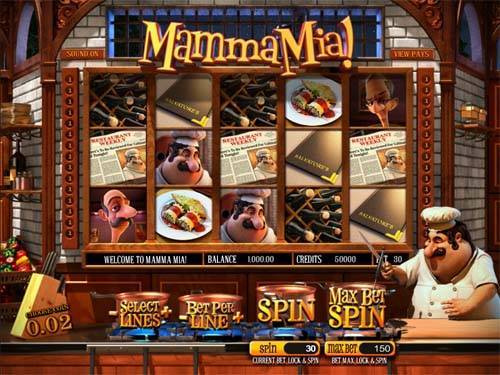 Mamma Mia slot The game was created by Betsoft Gaming which is known for its original games with stunning graphics and interesting plots.

Coin denomination ranges from 0.02 to 1, the number of lines – 1 to 30, and the line rate (number of coins) – from 1 to 5. The overall rate is the product of the three values. The winning combination is considered to be composed of at least 3 identical symbols in a line from left to right.

The game was created by Betsoft gaming, which is known for its original games with stunning graphics and interesting plot.

Let’s start with the fact that the game has a Wild symbol, but it is not quite normal. Besides the fact that it substitutes all other symbols (except Scatter), you can “lock” it (it will be locked in one place on the reel) for the next spin which makes your chances for winning higher. Of course, the cost of this spin would be more expensive than usual, and it will depend on the situation on the reel.

1. Preparing pizza
The first bonus game begins after the appearance of at least three pizza symbols on the reels. You get a random number of free spins. In this game you will cook together with the chef a real Italian pizza. In the course of this game you will spin the reels for free, and the symbols they will be entirely of ingredients for pizza.

The second bonus game will begin after the reels drop out at least three symbols with the image of a large iron lid that covers ready-made meals. In this game you just have to choose one of them to pick up and learn what winning is hiding underneath.

In the third bonus game, which starts when at least three symbols of the restaurant critic appear. You will need to help our cook to get a good estimate of his dishes. You have to choose what kind of food the chef will present for the judgment of the strict critic. He will evaluate the dish based on four criteria.

Soundtracks in the Mamma Mia slot game as good as graphics – they are at the highest level. It consists of various sounds that successfully create an atmosphere of this Italian kitchen.

Mamma Mia online slot is very funny and original. A large number of bonus games and original features are presented in the game, giving a player a good chance of winning.

You can try play Mamma Mia slot for free in demo version or for real money.